Jake’s Law: How the Memory of My Son is Driving Desperately Needed Change in AZ
March 26, 2020 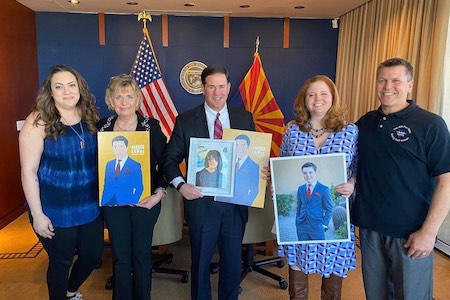 “That will never happen in Arizona.”

“The Arizona legislature will never pass a state parity law.”

Two years ago, these were the typical responses my husband and I heard from all corners of Arizona’s political landscape. However, driven by the powerful combination of overwhelming love for a child lost to suicide and deep, smoldering rage over an insurance company’s refusal to cover the mental health care he desperately needed, we remained undeterred. We could not and would not be discouraged from fighting to ensure no other family would have to endure what we endured on our journey to help Jake.

You would have liked Jake, everyone did. He had a passion for airplanes and loved to eat. He had such reverence and respect for our military and our first responders. His dream was to be an Air Force pilot. He was at his happiest when flying, posting videos to his YouTube channel, or playing with his adored dog Loki. Jake was so much more than his mental illness.

On January 11, 2016, our lives changed forever. We lost our sweet, loving, vivacious son, Jacob, to suicide. He was only 15 years old.

Jake was hospitalized twice in a span of five weeks for suicidal ideation. In both instances, he was released after only five days. After the first hospitalization, our insurance company authorized placement in an intensive outpatient program (IOP). Unfortunately, it was not only ineffective; it was counterproductive. Jake was actually struggling more after the IOP. Soon, we found ourselves back in the hospital.

During his second stay, we pleaded with the insurance company to cover a longer inpatient stay for Jake. They ultimately declined our request saying it was not medically necessary. We knew they were wrong. Jake’s doctors knew they were wrong. We felt helpless. Our insurer insisted that Jake repeat the IOP, saying that because he had been readmitted to the hospital, he would have to fail first before another therapy could be approved. We were confused, shocked, and completely terrified. We tried desperately to reason with them about the first IOP experience and how Jake’s mental state had worsened, but our pleas fell on deaf ears. The insurer said we could appeal the decision and sent us an appeal packet, which was completely overwhelming.

We knew, deep down, if Jake had a life-threatening physical condition, he never would have been released from inpatient care. Tragically, less than three months later, he was gone.

I tried to keep myself busy in the months following Jake’s death. I took to my computer to do something I was good at: research. My husband and I knew we had to stop this from happening to other families. Our research led us to the 2008 Mental Health Parity and Addiction Equity Act (MHPAEA), which led us to David Lloyd and The Kennedy Forum. We were excited to find out that The Kennedy Forum was working hard to implement a parity law in every state. We immediately joined their coalition. Thanks to The Kennedy Forum we finally had a direction and a trusted place to start. We were filled with hopeful excitement.

Over the next several months, we learned everything we could about MHPAEA, state parity laws, and lawsuits against insurance companies for parity violations. We started meeting with state legislators to discuss parity and the worsening suicide crisis impacting families across the nation. We even started giving parity presentations around the state. We found that most people were unfamiliar with parity and didn’t realize that federal protections even existed. We were determined to change that.

Although we had found several sympathetic ears in the state legislature, everything changed when we were able to meet with staff in Governor Doug Ducey’s office. Our initial meeting was met with empathy and high interest, but we weren’t sure if anything would come from the dialogue, even though the staff spent well over an hour with us. Several months later, we were called for a follow-up meeting and were told that addressing the suicide crisis was going to be a priority for the Governor’s administration in the coming legislative session. We were advised not to tell anyone until a policy direction was more established. Keeping this secret was beyond challenging, but we greatly respected the Governor’s process.

Knowing we had a great deal of work ahead of us and understanding that this couldn’t be done alone, we formed the Arizona Coalition for Insurance Parity. We were thrilled to have many organizations and individuals join and actively support our efforts.

In September of 2019, we met with Senator Kate Brophy McGee. Her name came up repeatedly as we met with legislators about our goals. She had a strong reputation as a leader in health care policy and was well known for working in a bipartisan fashion. Sure enough, after our meeting, Senator Brophy McGee agreed to become an advocate and bill sponsor. We knew if anyone could help us pass this legislation, it was going to be her. Within minutes of meeting us and hearing our story, she said she would do all she could to help us.

Her advocacy was paramount to our success. Together we spent hours and hours in stakeholder meetings to draft Senate Bill 1523, named “Jake’s Law” in honor of our son. It was a moment I will never forget. We were in front of the insurance industry and numerous other interested parties at one of the many stakeholder meetings we attended when Senator Brophy McGee asked if we could name the bill after Jake. We couldn’t hold back the tears. We were beyond honored, knowing this would enshrine Jake’s legacy in state law and allow our amazing son to continue to help people and save lives.

Jake’s Law is about parity, but it contains so much more. The purpose is to enact parity and end the youth suicide crisis in Arizona. It included an $8 million appropriation for K-12 students who are uninsured or underinsured to bridge the gap while the parity portion of the law is fully implemented. We knew some of the provisions in the bill would be a hard sell, but we had to try. We were incredibly proud of the legislation and what it would mean to our state.

Navigating the legislative process isn’t easy. It’s imperative to have a strong bill sponsor, a strategy, and a willingness from supporters to work hard and do what it takes to succeed. As a parent or loved one who has lost someone to suicide, it also takes courage and stamina because the experience is emotionally draining. We had to relive our most painful moments over and over again in meetings with policymakers and in public testimony. And we testified in four separate committee hearings.

Among the many lessons I have learned throughout this life-changing process, the most important is that our personal stories and vulnerabilities have the power to change hearts and minds. We encourage anyone impacted by mental illness to make your voice heard and become an advocate. Together, we can fight for a better system.