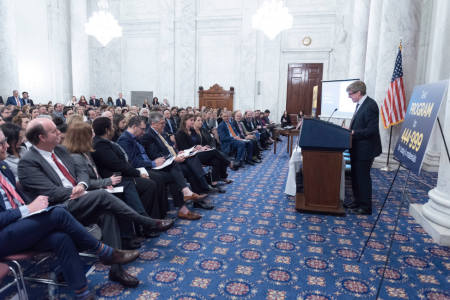 While a slight increase in life expectancy and a slight decrease in overdose deaths—per recent CDC data—are definitely steps in the right direction, the U.S. mental health crisis is far from over. In fact, a closer look at the numbers provides a stark reminder of where we are.

To set the stage, a woman named Carmen B. shared a powerful story about battling her insurance company to cover treatment for her son, who had attempted suicide. Carmen invested more than 1,000 hours fighting for the mental health benefits her son desperately needed and submitted over 3,000 pages of documentation. Her eye-opening description of this personal journey reinforced the urgent need for parity enforcement and for quality, integrated care, among other things.

“Agenda for Change” went on to highlight several new reports, initiatives, and resources that will be critical for defining the next steps in the fight for mental health equity.

As former U.S. Rep. and founder of The Kennedy Forum Patrick J. Kennedy pointed out ahead of the event, “As a nation, there are tangible steps we can take right now to save lives…This is about equality for those with mental health and addiction challenges. We must act now to prioritize measures and resources that truly address these systemic problems and create meaningful, lasting change.”