On Tuesday, December 5, 2017, former Congressman Patrick J. Kennedy testified in front of the Senate Committee on Appropriations, where he spoke to members of the Subcommittee on Labor, Health and Human Services, Education, and related agencies (Labor H Subcommittee) about the opioid crisis at the invitation of Subcommittee Chairman, Senator Roy Blunt (R-MO). 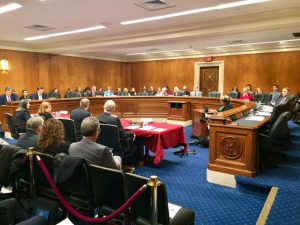 This particular subcommittee, of which Senator Patty Murray (D-WA) is the ranking Democratic member, is responsible for appropriating funds to several key agencies that play a role in addressing our nation’s concurrent overdose and suicide epidemics, namely the Department of Labor (DOL) and the Department of Health and Human Services (HHS). These departments are two of the most important agencies within the federal government in terms of stemming the tide of a public health catastrophe that claims nearly 300 lives each day.

Kennedy submitted written testimony to Subcommittee staff on Friday, December 1, which pointed to the urgent need to dramatically increase federal funding in response to an escalating crisis. He first noted that any reductions in funding to Medicaid would exacerbate the problem, and that leaders in Washington would be judged harshly by future generations for a poor response to the biggest public health threat of the 21st Century. He also reminded the Committee that Congress almost cut Medicaid earlier in 2017 when 49 Senators voted in favor of the Better Care Reconciliation Act, and that 217 House Representatives acted similarly in voting for the American Health Care Act. Both pieces of legislation would have dramatically reduced Medicaid spending and likely led to increased deaths of despair.

In his written testimony, Kennedy pointed to the federal response to Hurricanes Harvey, Irma, and Maria, as well as the response to the wildfires on the west coast. After these natural disasters claimed several hundred lives and damaged infrastructure, Congress appropriated more than $50 billion in several pieces of legislation. Conversely, Kennedy noted, in the time since Hurricane Harvey made landfall in August, more than 30,000 Americans have died from overdoses and suicides and Congress has neglected to appropriate any additional funding.

He reminded subcommittee members that we only have to look to the recent past to find evidence of how to successfully address a public health crisis that kills tens of thousands of people each year. In 1996, at the height of the HIV/AIDS epidemic, more than 50,000 people died from HIV/AIDS. At the time, the federal government was spending the 2017 equivalent of $12 billion to combat the crisis. Within less than a decade, Congress doubled federal funding to $24 billion (2017 equivalent) and the death toll plummeted to fewer than 10,000 fatalities per year. During his public testimony, Kennedy pointed out that “we know what to do, but we are lacking the political will to do it.”

Kennedy also publicly addressed the corporate tax cut legislation that passed Congress on Saturday, December 2. This legislation, he argued, will without a doubt have dire consequences in our ability to address the opioid crisis. He wondered how, at a time of record highs in the stock market, with billions of dollars in cash sitting in corporations reserves and decade-low unemployment rates, Congress decided that providing more than one trillion dollars in tax cuts to transnational corporations and wealthy inheritors was a higher priority than the 9,000 deaths occurring each month from overdoses and suicides.

He took insurance companies to task for failing to adhere to the Federal Parity Law, referencing data from the recent Milliman report, which confirmed that reimbursement rates for mental health and substance use disorder treatment providers, through private insurance plans, were far lower than reimbursement rates for other medical providers, relative to Medicare rates, among other alarming data.

“The barriers insurance companies are putting up are reinforcing stigma around mental health and addiction,” said Kennedy.

In summary, the public hearing allowed Kennedy to underscore the most critical point in our battle against the opioid crisis: the time for meetings, panels, presidential commissions, and empty promises is over. Our country must get serious by dedicating sustained federal funding, just like we would do and have done for other major public health crises.

« Patrick J. Kennedy Meets with DOL Secretary Acosta to Discuss Enforcement of Federal Parity Law
Fighting for Coverage: How I Learned to Navigate the Appeals Process »