In his role as Chairman of the President’s Commission on Combating Drug Addiction and the Opioid Crisis, Governor Chris Christie appointed fellow Commissioner, former congressman Patrick J. Kennedy, as the Commission’s liaison to the Department of Labor (DOL) during the fourth meeting of the Commission on Oct. 20, 2017. DOL is responsible for regulating the majority of commercial health insurance plans in America, which includes enforcing the Mental Health Parity and Addiction Equity Act (MHPAEA) of 2008—also known as the Federal Parity Law—which requires insurers to treat illnesses of  brain, such as clinical depression and opioid addiction, the same way they treat diseases of the body. As the lead sponsor of MHPAEA, Kennedy is uniquely qualified to assist DOL in navigating the Federal Parity Law. 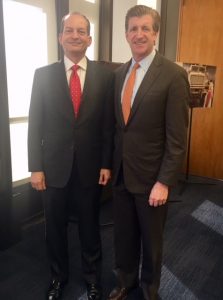 DOL Secretary Alexander Acosta also attended the meeting on October 20th and explained to the Commission that DOL does not have the authority to levy fines against insurers and health plans for violating the Federal Parity Law. He further warned that without the ability to levy fines, DOL will remain limited in its ability to bring insurers and health plans into compliance with the law. The Commission heeded the Secretary’s warning and included in its final report on November 1 a direct recommendation to the President and Congress that DOL be given this authority.

On November 20, exactly one month after the meeting at the White House, Kennedy met with Secretary Acosta, assuring him that he would speak out in support of any legislation that would grant DOL the authority to fine insurers.

Kennedy and Secretary Acosta also discussed the Commission’s other parity recommendation that all federal and state regulators should use a “standardized tool that requires health plans to document and disclose their compliance strategies for nonquantitative treatment limitations (NQTL) parity.” These NQTLs are very complicated and involve medical management practices that insurance plans use such as prior authorization, step therapy, and other managed care practices. Kennedy urged Secretary Acosta to look to the The “Six-Step” Parity Compliance Guide for Non-Quantitative Treatment Limitation (NQTL) Requirements as the standardized tool recommended by the Commission report. He also asked that DOL use that tool when investigating plans for potential violations of the Federal Parity Law involving NQTLs, especially in light of the fact the several state insurance departments are beginning to use the Six-Step Guide. Kennedy stressed that if all regulators use this tool, monitoring health plans and insurers for compliance will be much easier, and insurers will no longer suffer from the administrative burden of having to satisfy differing compliance requests from state insurance commissioners all over the country.

Kennedy also asked that Secretary Acosta have the Kennedy Forum staff train all of DOL’s benefits advisors and health investigators about some of the more complex intricacies and nuances involving NQTLs and how to use the Six-Step Guide. The reason he pushed for such a heavy emphasis on NQTLs is because that is the area where insurers and health plans have to improve the most. While insurers and health plans have done a good job of complying with the Federal Parity Law when it comes to things like copayments, coinsurance rates, and numerical limits on mental health and addiction treatment, they have considerable ground to cover when it comes to complying with NQTL parity requirements.

The meeting between Kennedy and Secretary Acosta was a critical step forward in making sure full implementation and enforcement of the Federal Parity Law finally occurs, nearly a decade after the law went into effect.

Tools for Families, Advocates, Regulators, and Others

Consumers, family members, providers, case managers, and legal advocates can use a website called Parity Registry to fight back after being wrongfully denied coverage for mental health or addiction treatment services. Developed by The Kennedy Forum, Parity Registry is the only resource in the U.S. where users can:

The Kennedy Forum’s Parity Track website monitors implementation of the Federal Parity Law in all 50 states. The site keeps tabs on what state insurance commissioners and attorneys general have done to implement the law, and tracks all parity-related legislation that has been introduced since the law was passed. More than 1,000 pieces of legislation and regulatory actions are currently summarized on the website. It also provides guidance for state regulators in helping to implement the more complicated aspects of the Federal Parity Law.