School screenings: what we’re missing and how some states are taking action
March 28, 2022 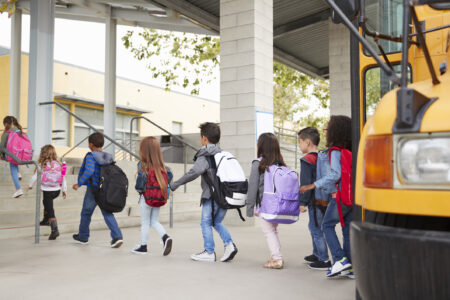 With five children, Patrick and I have heard our fair share about school physicals over the years. But one thing is always missing: mental health. As a society, we’re letting a critical opportunity to monitor an increasingly at-risk component of kids’ health fall by the wayside.

In 2019, the CDC reported that suicide was the second-leading cause of death among young people ages 10 to 14, and preliminary data reveals that suicide rates have only increased for persons between ages 10 and 34 during the pandemic. Several factors make this such an important stage of life when it comes to mental health: most mental health conditions have their peak of incidence during the transition from childhood to adolescence; 14 is the average age of symptom onset; and those under the age of 25 experience the greatest delay of mental health treatment.

An additional 15-minutes per school year—during which a handful of mental health questions are incorporated into a built-in school physical—could provide a vital counterweight to these hurdles, and be the difference between life and death for some students.

Universal screenings are backed by authorities on the subject of student mental health including the National Association of School Psychologists and the American Academy of Pediatrics. While school-based mental health screenings are still not federally mandated, some states and school districts are stepping up to address the issue independently.

Absent state guidance, school districts are integrating screenings into their programming to better identify mental health concerns affecting their students. Canyons School District in Utah opted to establish after-school-hours screenings, where parents can bring in their kids to be seen by a specialist. There, students run through 15-20 minutes’ worth of questions designed to identify symptoms of anxiety, depression, self-harm, or general feelings of social isolation. Specialists then recommend follow-up to parents. When asked to comment on the state of mental health in her district, the Student Services Department Program Administrator commented, “We’re finding probably the greatest need that we have seen, at least during my career.”

Statewide change is also picking up momentum. In 2017, Illinois adopted Senate Bill 565, which integrates mental health screenings into K-12 school physicals statewide. This law requires all students to undergo an age-appropriate social and emotional screening, developed and revised under the discretion of educational and mental health experts, including teachers, school social workers, school psychologists, and school nurses. In this way, Illinois aims to cultivate the most up-to-date, evidence-based screening formats to identify potential issues early on and help students receive the support they need. The state is still exploring ways to fund these screenings—including grants legislated this year which provide funding for mental well-being checks.

Minnesota has also moved to fund screenings and well-being checks. Governor Tim Walz and Lt. Governor Peggy Flanagan released a surplus spending plan in January of this year which allocates $9.983 million for enhancing school-based mental health screening. In early March, Minnesota’s State House of Representatives also introduced and passed bill HF3634, which requires mental health screenings in K-12 public schools. This is a good example of what we need—evidence-backed policy implementation coupled with the funding needed to support it.

A concise list of real legislative solutions was developed by the Hopeful Futures Campaign this year to provide guidance to states and schools –a joint effort by leading mental health organizations, including The Kennedy Forum, to clearly outline policies which can make the difference between life and death for students. Through this campaign, policy opportunities are described and individualized to each state depending on what they are lacking, including investing in improving the ratios of school psychologists to students, requiring adoption of evidence-based life skills education for K-12, and requiring annual well-being checks for all students.

It’s been shown that childhood depression is more likely to boil over into adulthood if it goes untreated. This past year, the U.S. Surgeon General declared theyouth mental health crisis a public health emergency. If we don’t enact the measures that we know bolster the frequency of treatment in our youth, what can we expect but the declaration of an adult mental health crisis within a decade?

Mental health is an indivisible component of health. We need to treat it as such by integrating mental welfare checks into school physicals, moving one step closer toward supporting overall well-being nationwide.