Addressing trauma from gun violence must be part of our legislative reform
June 28, 2022 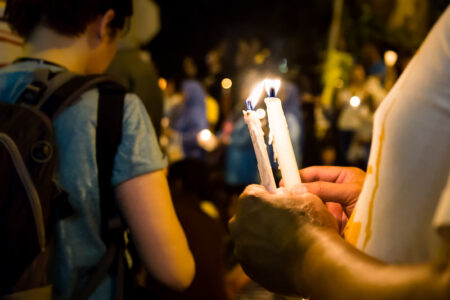 By Lauren Finke, policy advisor at The Kennedy Forum

In the days since the mass shooting in Uvalde, Texas, media, policymakers, advocates, and public figures have focused in on the complex issue of preventing another tragedy. Understandably so. People are fed up. They are tired and exhausted from the seemingly constant headlines marking yet another mass shooting. They want action.

But for more and more of us, the emotions run even deeper. Processing these events is increasingly personal and often re-traumatizing.

Eight years ago this month, a man with a shotgun entered my college during finals week. He killed one student and wounded three others. The terror of that day impacted students, their families, their friends, and the entire campus community. Over the hours, weeks, months, and years since, nearly everyone I know from that time still has something surface when other mass shootings make headlines.

I was not on campus when the incident occurred, but I will always remember the panic I felt with every unanswered text to my friends that day. I had it so, so much easier than many of my peers, but the impact of the day can still affect me. I, like many of my peers, sometimes have trouble sitting in crowded restaurants, bars, and music venues without scoping out emergency exits. I can list a surprising number of pop songs that contain sounds of gunfire (due to my body’s automatic responses to them).  My friends who had mere drywall and luck between them and the shooter—and far too many other young people in this country—continue to experience much worse. Anyone whose life has been touched by one of these tragedies walks through the world differently.

Over 100 people are killed by gun violence every day in the U.S. and more than 200 are wounded. That means every day, 300 people have direct contact with a bullet, but countless family members, friends, colleagues, and community members are hurt as well. A review of 49 studies on 15 mass shootings, nine of which were in schools and universities, found PTSD, anxiety, panic attacks, substance use, and phobias, as well as “nonspecific psychological distress” like generalized feelings of fear or unease, were common among survivors. A 2020 study found a 21.4 percent increase in antidepressant prescriptions for people under age 20 in a local area where a school shooting had occurred—compared with areas just 10 miles away. The effects of gun violence continue long after the violence is over and they don’t just impact individuals, they impact entire communities.

In the days following Uvalde, Craig Nelson, a survivor of the Columbine shooting, stated, “When the headlines break, I often hear from friends, family, and colleagues: ‘I’m so sorry you have to relive this again.’ The truth is, we are all reliving it again on some level. The steady cadence of shock, grief and pain is our collective story.’”

Even if all of the gun policies we are demanding became law tomorrow, we will still have outward rippling effects of trauma to contend with. In the vast majority of cases, mental health challenges are the result of gun violence, not the cause. The victims of gun violence and the communities where they go to school, work, and have a family and friends are all forced to face the aftermath of these tragedies.

When one in four mass shooting victims is a child or teen, gun violence is now a critical component of our youth mental health crisis, fueling already increasing rates of anxiety, depression, suicidal ideation, and more. The longer the U.S. struggles with this issue, the more trauma we all have to carry, coming at a great cost to the health of our communities and society at large.

That day in June 2014 was not the first time I had to send flurries of texts checking in on the safety of my friends following a mass shooting. Just a few weeks before my campus had the blanket of safety and security ripped from it as friends hundreds of miles away in their own college community of Isla Vista faced a situation much the same. At the time, I remember feeling relief for my friends’ safety, but not fear in the way that I would feel a few weeks later when the community being ripped apart was my own. The most comforting words I received in the aftermath were from my friends who had been through such events just weeks earlier.

It is imperative that our legislative reforms consider survivors and their communities, and account for the trauma that unfolds in the aftermath of these events, long after the headlines fade and GoFundMes cash out.

We are failing gun violence survivors, their communities, and an entire generation, if we force them to continue to live in a world where they must comfort themselves after these tragedies. As more and more people join the club of those who’ve been directly impacted by gun violence—a club no one wants to be in—advocates must make our voices heard about mindful strategies and policies for mitigating the aftereffects on survivors and their communities. Urgent action on guns is desperately needed, but it won’t be enough to clean up the mess we already have on our hands from generations of gun violence. Dealing with trauma is long-term, dig-your-heels-in kind of work. If we do not do the work, we will continue to perpetuate this trauma for a new generation.