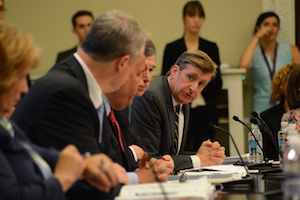 Due to concurrent, escalating opioid overdose and suicide crises, tax cut legislation that will impact Medicaid and Medicare, and alarming reports that showcased the sad state of mental health parity nationwide, 2017 was a particularly challenging year in the advocacy community. But, as always, many important seeds were planted, many powerful connections were made, and much critical progress occurred “in the trenches,” away from news headlines and television coverage.

For example, The Kennedy Forum released a groundbreaking mental health and addiction policy guide, titled “Navigating the New Frontier of Mental Health and Addiction: A Guide for the 115th Congress.” This powerful resource contains specific recommendations for each House and Senate committee that has jurisdiction over mental health and addiction. The recommendations are grouped into five categories:

The guide continues to provide a comprehensive roadmap for implementing the policy solutions necessary to improve mental health and addiction treatment in our country’s health care system.

We also officially launched and promoted Parity Registry, a website where consumers can learn to file an appeal with their health plan, send a complaint directly to state enforcement officials after being wrongfully denied coverage for mental health or addiction treatment services, access step-by-step appeals guidance, find a comprehensive listing of state and federal regulators who can help with an appeal, and review FAQs and other information to help advance an appeal. The data shared will help provide the necessary insights to help shape public policy and influence future legislation. Our robust Parity Track website – where advocates, journalists, consumers, and others can track legislative, regulatory, and legal parity activities in all 50 states and at the Federal level to monitor implementation and best practices – continues to serve as a virtual clearinghouse for best practices in parity progress.

The Kennedy Forum partnered with numerous national policy and advocacy organizations to introduce state-based parity implementation legislation in 2017. Bills introduced in Connecticut, Illinois, Minnesota, Montana, New Jersey, Pennsylvania, and Tennessee were adapted from The Kennedy Forum’s model state parity legislation. Legislation in Montana and Tennessee passed both chambers of their legislatures with bipartisan support, and the bills were signed into law by Governors Bullock and Haslam, respectively. Legislation in Tennessee passed both chambers unanimously because legislators understood that parity implementation is a key tool in addressing the opioid crisis, which has devastated Tennessee.

Heading into 2018, The Kennedy Forum will target additional states. So far, Colorado, Delaware, Georgia, Florida, Mississippi, Ohio, Virginia, and Wyoming are in the early stages of adapting the model legislation for introduction early in the year. If you would like your state to follow suit, urge your state legislators to contact The Kennedy Forum and work to introduce the model legislation adapted to your state’s needs.

In addition to legislative solutions, working in partnership with the American Psychiatric Association and the Parity Implementation Coalition, The Kennedy Forum also created a regulatory solution: a tool for regulators to enforce the more complex components of the Federal Parity Law. The tool helps regulators determine if health plans are developing and applying their medical management protocols in ways that are compliant with the Federal Parity Law (these protocols include prior authorization, step therapy, and other managed care practices). While health plans have done a good job in complying with some of the simpler aspects of parity, investigations by state and federal regulators have revealed that there is still a long way to go before the insurance industry is in full compliance with the law. 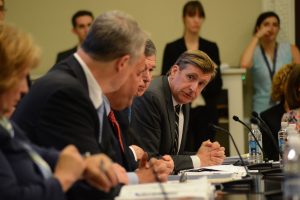 In May, The Kennedy Forum’s leader and founder, former U.S. Representative (D-RI), Patrick J. Kennedy, was appointed by President Trump to the President’s Commission on Combating Drug Addiction and the Opioid Crisis. The Commission released its interim recommendations in July and its final recommendations in November. Mr. Kennedy also publicly released his own recommendations that were submitted to other Commissioners in advance of the final recommendations (click here for abridged highlights). His personal recommendations provided greater detail as to how Congress and the Administration could implement a comprehensive “all hands on deck” approach to addressing the opioid overdose and suicide epidemics. Since the Commission disbanded in November, he has been vocal that substantial and sustained funding from Congress is needed to save lives and stop the devastation impacting so many American families.

As a follow up to the Commission report, during his recent testimony in front of the Senate Appropriations Subcommittee on Labor, Health and Human Services, and Related Agencies, Mr. Kennedy called for Congress to set aside no less than $25 billion in supplemental appropriations as a first step in truly addressing the opioid overdose and suicide epidemics. That number is less than half of what Congress hastily appropriated to address hurricanes and wildfires in 2017, which claimed several hundred lives. In comparison, the opioid overdose and suicide epidemics will have claimed nearly 40,000 lives in the time period between when Hurricane Harvey made landfall in August and the end of 2017.

Also during his testimony, and elsewhere recently, Mr. Kennedy voiced strong opposition to tax cut legislation that will substantially reduce taxes on multibillion dollar businesses at a time when they are sitting on over two trillion dollars in cash reserves and unemployment is at its lowest rate in a decade. This corporate giveaway will ultimately lead to stark reductions to Medicaid and Medicare – a top agenda item for leadership in Washington in 2018. According to Kennedy, “At a time when our country is in the grips of a dire public health epidemic, some in the nation’s capital are more concerned with satisfying their powerful campaign donors than saving lives and mitigating devastation in our communities. These tax cuts and subsequent safety net spending cuts will make a bad situation even worse.”

In December, the actuarial and consulting firm, Milliman, released a scathing report showing that insurers are not adhering to the Federal Parity Law. The report found that commercial health plans reimbursed mental health and substance use disorder providers at lower rates than they did for other medical providers, when compared to Medicare reimbursement rates. It also found that mental health and substance use disorder treatment was four to six times more likely to be provided out-of-network than other medical treatment. Out-of-network treatment is almost always more expensive than in-network treatment – a reality that leads many people to give up.

Recently, Mr. Kennedy wrote a powerful op-ed in The Hill, further explaining the implications of the Milliman report and what government, families, and individuals can do to fight back against discriminatory insurance practices.

As any advocate knows, change doesn’t happen overnight. The Kennedy Forum remains steadfast in its mission to unite the health care system and rally the mental health community around a common set of principles: Fully implement the 2008 Federal Parity Law, bring business leaders and government agencies together to eliminate issues of stigma, work with providers to guarantee equal access to care, ensure that policymakers have the tools they need to craft better policy, and give consumers a way to understand their rights.

Remember: Life doesn’t get easier, we get stronger when we unite for mental health equity!

Hope to see you in the new year – January 16 – at the Fourth Annual Meeting of The Kennedy Forum in Chicago. Best wishes for a happy and healthy 2018.

« Fighting for Coverage: How I Learned to Navigate the Appeals Process
365 Days with Schizophrenia in a Broken System: Joey’s Story »