The President’s Commission on Combating Drug Addiction and the Opioid Commission held its last meeting on November 1 and submitted its final report to President Trump. The Kennedy Forum’s founder and leader, Congressman Patrick Kennedy, was one of the six Commissioners who helped create the report. The document contained 56 distinct recommendations directed at the Administration, Congress, state and local governments, and other stakeholders focused on addiction prevention, surveillance, overdose reversal, treatment, research, and interdiction.

The President appointed Congressman Kennedy as one of the Commissioners in part because of his work in Congress on mental health and addiction. He was the lead sponsor of the Mental Health Parity and Addiction Equity Act of 2008 (the Federal Parity Law). Unfortunately, nearly a decade after the Federal Parity Law was signed by President George W. Bush, parity is still not fully implemented, as the report notes on page 72:

In other words, parity is a simple concept that requires health insurance plans to offer behavioral health coverage that is comparable, and equal to, the coverage for physical health. In reality, creating appropriate parity regulations, and enforcement of parity laws, is far from simple.

35. Because the Department of Labor (DOL) regulates health care coverage by many large employers, the Commission recommends that Congress provide DOL increased authority to levy monetary penalties on insurers and funders, and permit DOL to launch investigations of health insurers independently for parity violations.

36. The Commission recommends that federal and state regulators should use a standardized tool that requires health plans to document and disclose their compliance strategies for non-quantitative treatment limitations (NQTL) parity. NQTLs include stringent prior authorization and medical necessity requirements. HHS, in consultation with DOL and Treasury, should review clinical guidelines and standards to support NQTL parity requirements. Private sector insurers, including employers, should review rate-setting strategies and revise rates when necessary to increase their network of addiction treatment professionals.

Recommendation #35 underscores something that most people do not realize: the U.S. Department of Labor (DOL) is responsible for regulating the majority of health insurance plans in the country, yet it has no real enforcement powers. Under current federal law, DOL is not authorized to levy any sort of penalties against health insurers for violating the Federal Parity Law. This severely undermines DOL’s ability to hold insurers accountable. In essence, obeying DOL is a “voluntary.”

Recommendation #36 speaks to the complex nature of compliance with the Federal Parity Law. These so called “non-quantitative treatment limitations (NQTLs)” are managed care practices that have become more and more popular with insurers over the last several decades. For example, a person might be in a hospital after a drug overdose. The hospital may recommend that the person go to an inpatient detox facility, but the person’s insurance plan might require a thorough review first to make sure the treatment is “medically necessary.”

The Federal Parity Law requires that insurers conduct these reviews in a way that is no more “stringent” than how the reviews they conduct for other medical treatments. Unfortunately, investigations performed by DOL and a number of state regulators have uncovered violations across the board when it comes to how insurers are designing and applying these reviews and other NQTLs. To make matters worse, different states have different ways of trying to determine if insurers are in compliance, which has created considerable confusion among insurers about how they should be demonstrating compliance. The call for a standardized tool is crucial.

The Kennedy Forum is working with members of Congress to help them devise a legislative solution that would address both of these recommendations. At the final meeting of the Commission on November 1, Governor Christie stated that he believed that the President would support legislation as such and that he could not imagine why any member of Congress would not vote for it. After years of neglect, parity enforcement is finally one of the top priorities at the highest levels of government.

Roxanne Schwartz (in red below), friend to The Kennedy Forum, shared her personal story with the President’s Commission on Combatting Drug Addiction and the Opioid Crisis during the final meeting. She went through seven insurance denials and spent more than $300,000 of her own money (borrowing against her home, depleting college funds, and pulling from retirement accounts) in her efforts to get help for her sons—both of whom struggle with substance use disorder. Roxanne said the Parity Registry site helped her to navigate the system so that she could file appeals and fight back against discriminatory insurance tactics. 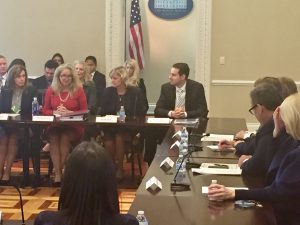 Federal Parity Law: How does your state stack up? Parity Track is a website where journalists, consumers, and others can track legislative, regulatory, and legal parity activities in all 50 states and at the Federal level to monitor implementation and best practices.