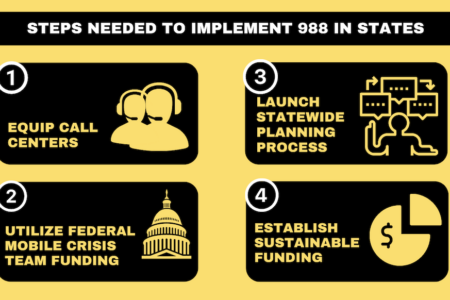 Tomorrow, the new 988 crisis line for mental health and substance use emergencies goes live across the country. Approximately one year ago, The Kennedy Forum shared an analysis of state legislative action needed to support 988 by the national go-live date. At the time, only Colorado, Nevada, and Washington had passed adequate legislation to facilitate 988 implementation (i.e. having a comprehensive plan for a full behavioral health crisis continuum and ongoing funding to see the systems—call centers staffed by mental health professionals, mobile response teams, and crisis stabilization services—built out). Unfortunately, no other states have been added to this list to date. As it stands now, less than 8% (24.7 million) of the population are in states that have passed needed legislation.

A deeper dive into state activity

Eighteen states have introduced 988 fee legislation that have not moved forward. Some bills have set fee amounts that are insufficient to fund needed services, while others have been downgraded to “study bills” or unfunded 988 “processes.”

Between February and July of 2022, five states had 988 fees actively stripped out of their bills in part because telecom companies opposed the funding mechanism the federal government authorized, which would allow them to pass a “user fee” on phone lines that would fund comprehensive implementation of 988.

As of July 2022, California is the only state still considering a comprehensive fee and planning process. In preparation for the go-live date, The Kennedy Forum, in partnership with Steinberg Institute, NAMI California, NAMI Contra Costa, Mental Health America of California, The Miles Hall Foundation, Contra Costa County, Los Angeles County, and the California Council of Community Behavioral Health Agencies (CCCBHA), successfully advocated for the necessary funding and appropriations to support 988. We are happy to report that California has approved the following:

If passed, AB 988 would establish a fee of $0.08 for the first two years to sustain 988 call center operations and support a comprehensive state planning process. The fee would then be set based on system needs every year thereafter, just as the state’s 911 system is currently funded, with a cap of $0.30. The bill’s bipartisan support (70-0 in the Assembly, and 12-0 and 10-0 in Senate committees) is a remarkable indicator that this model works on both sides of the aisle.

The majority of the U.S. still has a long way to go—92% of the population live in states without a comprehensive plan and sustainable funding structure for 988. Nevertheless, with federal guidance and legislation from other states like California as a guide, we can continue to make progress. It’s time to pivot from a planning mindset to a catch-up mindset.

The following actions must be taken by remaining states as soon as possible:

Now is the moment for states to demonstrate their commitment to ending discrimination against those with mental health and substance use disorders. Far too many individuals, families, and communities have suffered due to systematic failures in recognizing and addressing crisis.